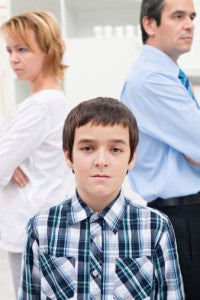 Divorces are often very painful experiences that leave one party feeling hurt, betrayed and possibly even vengeful. Unfortunately, divorces that involve child custody can often turn hostile. In some cases, one parent may try to retaliate by interfering with the other parent's visitation time and/or undermining a healthy relationship between the child and the other parent.

When parents put their children in the middle of their divorce, they may not realize the psychological damage they are inflicting. However, in the end, the children are the ones left feeling alienated and deprived of the love and affections of one of their parents. This pattern of behavior—when a child has a healthy relationship with one parent but the other parent is excluded from that relationship—is called “Parental Alienation Syndrome.” Clearly, this is a very serious problem in a great many divorce and custody cases.

Recognizing the pattern of behaviors that characterize Parental Alienation Syndrome is the first step to understanding and seeking resolution through the Family Court system. The following examples may constitute the alienation of affections:

When a father or mother cuts off contact, disconnects the phone or moves from place to place and does not let the other parent know the whereabouts of the children

By refusing to keep the other parent notified of a child's location and school, there is a clear intention to isolate the child from the other parent and make it impossible for that parent to be involved in the child's life. For example, in a recent case, the offending parent had a history of moving from place to place and frequently taking the children out of one school and enrolling them in another, all without notice to the other parent.  In another case, the children were involved in ballet and soccer, and the father was not kept informed of the dates and times of the activities, so he was not able to appear. This caused the children to feel that their father did not care about their lives. In another case, one of the parents intentionally scheduled extracurricular activities during the other parent's time with the children.

Parents who manipulate the parenting time schedule, make unreasonable demands or attempt blackmail against the other parent by saying they will leave town and the kids will never be located unless that parent gets what they want is alienation.

Intentionally disregarding the parenting orders of the court

In a recent case, my client was denied substantial parenting time because the other parent was not following the court orders. The parent with whom the child spent the majority of the time continued to live in Florida while the other parent had moved to California. The court orders allowed the California parent to have many holidays and a substantial amount of parenting time each summer. When my client went to the airport to pick up the child or when my client would send the airline ticket to the other parent, there would be no reply. Over a period of many years, this one parent had blocked most, if not all, of my client's court ordered parenting time. To resolve the situation, a motion was filed and hearing scheduled in which my client prevailed and also obtained an order for attorney's fees against the offending parent.

Using the children as a conduit for information

I had a case in which one parent obtained a court order to keep my client in the bleachers and at least 25 feet away from the child during the child's baseball games. In addition, after the game the other parent would not allow my client to come up to the child and even say, “hello” or “great game.”

In a recent case, a father was always in the background making comments while the kids spoke to their mother on the phone. The father was telling the children that “time was up” and insisting that the phone conversation come to an end, or even was listening to the conversations between the kids and the mother.

There is no easy solution to ending Parental Alienation Syndrome. One would hope that the love of the child would prevail over one parent's desire for retaliation. Unfortunately, many people cannot set aside their hostile emotions toward their (ex) spouses, a situation that often results in emotional damage and the estrangement of a child from one parent.

Because “any attempt at alienating the children from the other parent should be seen as a direct and willful violation of one of the prime duties of parenthood, which is to promote and encourage a positive and loving relationship with the other parent, and the concept of shared parental responsibility,”[1] Parental Alienation Syndrome violates the Florida best interest standards. A well-qualified divorce or child custody lawyer should be able to take a course of action to deal with Parental Alienation syndrome.

If you feel that your (ex) spouse or the other parent is interfering with your parenting time or undermining the relationship you have with your child(ren), begin to document these kinds of behaviors. Discuss your case with an experienced Florida Family Law attorney. Your lawyer can get the right child custody experts involved in the case or make the judge aware of these kinds of incidents.

Disclaimer: The blogs posted on ShayneLaw.com are offered for informational purposes only. These blogs are not a solicitation for legal business and should not be construed as providing any legal advice or legal opinions as to any specific fact or circumstance. Specific legal issues, concerns and conditions always require the advice of an appropriate legal professional. To obtain legal advice or opinions about Florida Family Law, personally consult with a licensed Florida attorney.

Thank you for contacting us. We will get back to you shortly.

Please complete all required fields below.